A Thorough Review of DoggCatcher for Android

As a kid I was baffled by the fact that my Dad always listened to talk radio.  I could not comprehend why anyone would rather listen to another person ramble on about politics or news.  When I got out of college and began working for a big tech company I was surprised to find that my tastes were changing.  It wasn't long before I too was listening to talk radio, although a different sort that what my Dad liked.  It's been 10 years since my interests shifted and thankfully the age of the internet has brought a new change called Smartphones.  My favorite media app is a great podcast app called DoggCatcher.

Android has not been out for very long (4+ years) and DoggCatcher (DC) was one of the earliest podcast applications available on Android.  I found it back in early 2009 when I was learning to use my HTC G1 and purchased for $7.  I used DC for a while, but when I ran into a problem where downloading wasn't happening consistently, I switched to Google Listen.   I might have stayed with Google Listen, but Google decided to decommission it and so I switched back to DC. 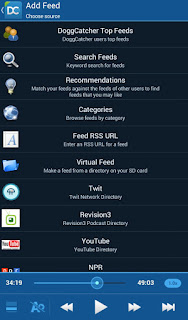 DoggCatcher has always offered multiple ways of obtaining a podcast. For new users there is a Discovery section called "Top Feeds" where popular podcast shows can be found.  There is also a space for Recommendations from other users.  But you can also search for shows by any word or category.  Additionally there are some great podcast groups that have their own directories like TWIT (This Week in Tech), Revision 3, NPR, and the BBC.

Video podcast shows are very popular and many people like to include YouTube videos in their Feeds list.  Personally, I like Hak5.org, TED Talks videos, and TWIT, which are available in audio as well.  Most of the larger networks provide the podcast shows in more than one format both for audio and video, so if your bandwidth, or screen size, or device capacity is limited, you have other options.

One other thing that I might not have mentioned in a podcast app, is the ability to read text news.  DoggCatcher goes one step further offering this feature, so if you really want all your media in one location, it's available too.

When you open the app the first screen shows the logo, then immediately following you will see the Main screen.  Across the top of the screen you will see the DoggCatcher logo, a pull-down filter, the refresh button, add button, and menu button. Once you have a larger feeds list, the filter may help you to find the type of podcast that you are looking for more easily.  If you hit refresh (circle icon) DC will check the status of all your shows and update any that have new episodes.  The add (+) button will take you to the Add Feed screen, where you can get more shows to add to your feeds list.  And last but far from least is the menu (three vertical dots), that I will get to later.

The Feeds list is the body of the Main screen and will list all your shows. For example, on the left are the Podcast show icon graphics that will give you a visual reminder of the show. Immediately to the right of that is the Title of the show along with a couple status notes.  In small print under the name is the current status of the last update and whether there was a change.  During updating this will say either "Updating" or "Queued".  On the far upper right are two numbers, each encapsulated in a square.  The number in green is the episodes that have been downloaded, but not played.  The number in blue is the episodes that you have started playing, but not finished.  And below these numbers is a small faint triangle for yet another huge sub-list of settings for that specific show.  (This is detailed in Sub Features)

At the bottom of the main screen is the control bar.  It displays the tracking bar, timers (start / end), a speed variable toggle, bar-size toggle, the autoplay toggle, and the familiar media control buttons.  The only toggle worth noting here, that is not noted anywhere else, is the bar-size toggle.  Per the the icon, it is possible to increase or decrease the size of the control bar.  The smallest setting shrinks the bar down to the size of the icon, revealing more of your Feeds List.

All android apps, that have additional features, have a menu. This app is not much different.  Thankfully, the Menu is mostly just a short table of contents and not a technical manual like the Settings.

The available media through DoggCatcher is second only to the incredible number of settings. I'm going to break down the settings into multiple sections because there are so many of them.  In any other situation this sort of granularity might be considered overkill, but to a Systems Administrator (like myself) it's awesome.

To begin, I need to talk about what the "Feeds List" is.  All the shows that you choose, are placed into your feeds list.  There are feed updates, global feed options, and limits to the feed.  Just about everything you do, except for actually playing the media is going to be in the feeds list.

Again with the almost unnecessary number of settings, just about everything that you can do with this app has it's own option and description.  For example, I use the LG Tone, a stereo Bluetooth headset with my smartphone and it has several buttons on it.  They all have multiple functions in the app, allowing for some pretty comprehensive control without directly touching the phone.

Headset (Bluetooth/Wired) - there are at least 10 options here so I will group the most important ones to keep it concise.
Audio - More control settings here for audio.
Video - There's not much here, since the majority of the controls are in the Audio section.

Who doesn't like to change the look of the interface?  There are another long list of options here in the UI most of which do some fairly nice things for your use of the app.
Backup / Restore / Export

As of the writing of this post I have transferred between 6 different Android devices since I first used DoggCatcher.  As a someone who has a long list of shows, it has been a saving grace that DC has a backup feature.  Only once have I had to completely retrain the app to keep all the episodes and if I can at all avoid it again, I will.  I'm not saying that I am lazy, but the process can be quite lengthy.

If you plan on switching phones or just have a 2nd or 3rd device that you would like the list to be on, I recommend using the Backup / Restore / Export features.  You can export the feeds list to OPML (a form of XML for outlines).

Believe it or not after all that you've read about so far, there are actually more things that fit into the category of miscellaneous (and yet there are still more features to discuss after this).
Widget

DoggCatcher has a widget.  It's simple, you have three options here for its background color, either none, transparent, or dark. Changes to the widget after placement do not take effect, once you change them in the app.  You will need to replace the widget to see the change.

In case you have odd problems with your Android device, DC provides a few workarounds.

For those who are serious about media, DoggCatcher will not let you down.  As noted in the last section there is yet another sub-list of settings for each podcast show.


Wow, if you've made it this far I am impressed,.it's a good lot of stuff to consider. I don't know if I would fault the developers for shoehorning so much into into this app and staying relevant, but they did it.  I'll be the first to admit that I have not used every Podcast App, but DoggCatcher was one of the first and pretty good from the start.  There are other options out there like Podcast Addict and BeyondPod.  So far DoggCatcher has kept up with the the pack, sitting in at #2 on Google Play (as of this article).  I hope you find as much use from DoggCatcher as I do.  Check it out on the Play store. (Lite version here)

Was this review helpful to you?  Did I miss anything that you think I should have covered?
Email ThisBlogThis!Share to TwitterShare to FacebookShare to Pinterest
Labels: Android Apps, DoggCatcher, Google Play, Media manager app, Podcast app 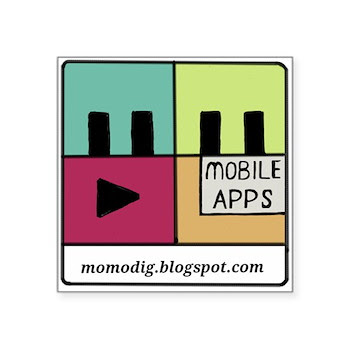